Patients can be struck by numerous objects leading to pain, disability, physical therapy, and perhaps embarrassment, if the new
ICD-10 codes an accurate indicator. Some of the codes seem nonsensical or unlikely. The fact that the codes exist amply demonstrate that these incidences have occurred – and multiple times in some cases.

There’s an extensive array of items that can be thrown, tossed and dropped that will cause injury. Most will lead to a visit to the ER or the physical therapist. Clinicians will definitely want to be ready for patients who have been hit by rowdy wildlife, from dive bombing macaws (W61.12XA) to head butting cows (W55.22XA) who may object to being milked.

If Grandma gets hit by a reindeer, code it as a V06.00xA, but for individuals who get thrown from a sleigh pulled by reindeer, that’s a code V80.929A. People interacting with churlish chickens with a propensity for throwing themselves at bipeds will code as a W6a.32XA. The codes make no differentiation between rubber chickens and real chickens, but there are codes for multiple encounters.

Land animals aren’t the exclusive cause of injuries. For the luckless patients who experience injury at the fins of water-dwelling creatures, it may feel like a script for a disaster movie. Clinicians will find coding options for clients with first and subsequent encounters with outraged orcas (W56.22xA), those who have been exposed to turtles (W59.29) and not-so-playful dolphins (W56.02XA).

Some individuals are just unable to multi-task while doing even the simplest things. Distracted talking and texting has led to multiple mishaps that practitioners will be coding for and may lead to some strange encounters with payers. There’s a code for people running into a lamppost (subsequent encounter, W22.02XD) and when walking the family canine (W54.1XXA).

Mankind is adept at conceiving new ways of having fun and doing it in the most dangerous venues possible. Bungee jumping (Y93.34), parasailing (Y93.19) and even playing a percussion instrument (Y93.32) or Y93.J4 for lips stuck to an instrument, can lead to unwanted conclusions. A friendly game of ultimate Frisbee (Y93.74) is cited as the reason for pulled muscles, broken bones and even whiplash. 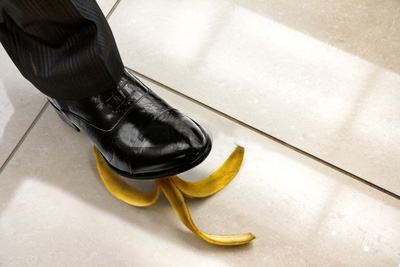 Even fun with imaginary and inanimate creatures can be hazardous. Individuals who sustain an injury by running through a snowman, (thereby committing snowman homicide or possibly a hit and run) will code as Y02.8xxA. For those who are confused about where to put the carrot during a snowman build and insert it in their own ear, use code T16.2xxA. On the dark side, those bitten by a vampire (superficial bite of other specified part of neck, initial encounter), that’s a code S10.87xA.

When hair causes constriction (initial encounter) clinicians will turn to code W49.01XA and E928.4 for an external hair constriction. For a non-scarring hair loss, there’s code L65.9. There’s no telling when a bad hair day will result in serious injury.

Even the very air is fraught with potential danger. For clients who discover they have an air leak, use code J93.82. Patients may be injured through falling spacecraft (V95.49XA). When clients displace their balloon, code it as a T82.523S, but for victims of a falling alligator, that’s code W5803XA.

ICD-10 codes reflect real incidents and complaints, but the ways in which they’re worded often make them fodder for fun. The primary points clinicians need to remember is that they need to code to the highest level possible and as accurately as possible – even if it results in long conversations with payers who have disbelieving minds. Perhaps they could code for a therapeutic massage.